Permitting
In place for exploration activities

El Quevar is an advanced exploration silver project with district potential located in the Salta Province of northwestern Argentina. We conducted significant exploration activity at El Quevar between 2004 and 2012, drilling approximately 400 holes/100,000 meters and conducting over 1,250 meters of underground exploration drifting. We identified a primary resource area and prepared 2010 and 2012 Technical Reports that covered the main Yaxtché deposit. Drilling outside the Yaxtché deposit has identified additional areas of particular interest, including numerous ore-grade silver intercepts, but much of the 57,000-hectare property remains under-explored. The property was placed on care and maintenance in early 2013.

In mid-2017 we initiated several studies at El Quevar given recent political and economic improvements in Argentina, intending to remodel the existing resource using an improved geologic model and a higher cutoff grade for silver, with the goal of identifying a smaller, high-grade main zone that would be amenable to underground mining. In February 2018, we were pleased to announce promising results. We issued a revised NI 43-101 resource estimate for the Yaxtché deposit, highlighting Indicated sulfide resources of over 2.6 million tonnes of silver at grades of 487 grams per tonne (g/t) in a potentially underground minable configuration that would be processed by flotation. The new estimate retains roughly 80% of the silver of the previous (RPMGlobal, June 2012) resource estimate at three times the silver grade.

We released a Preliminary Economic Assessment in September 2018 that outlines potential for a six-year mining operation producing 29 million oz. of payable silver at an average LOM grade of 409 g/t. The PEA shows a $45M net present value at a 5% discount rate at a price of $16.66/Ag oz.

In late March 2019, we began a 3,000-meter, approximately $0.6 million drilling program to further define the potential for additional mineralized material in the Yaxtché deposit and surrounding area. That program identified a new area of high-grade silver that we view as additive to the resource.  (Complete drill results are available on our website under El Quevar/Maps & Drill Results.) We are continuing surface exploration in the district to identify further drill targets in the 57,000 hectare property area. We plan to continue to advance El Quevar as much as possible within the limints of our current exploration budget and remain open to finding a partner to contribute to the funding of further exploration and development.

In April 2020, we announced the signing of an Earn-In Agreement with Barrick Gold Corporation. Barrick has the opportunity to earn an undivided 70% interest in the El Quevar project by:

In June 2022, Barrick completed a 5-hole, 1,300 meter initial diamond drill program to test highest priority targets at El Quevar. Barrick reported to us the occurrence of vuggy silica alteration, which is commonly associated with high sulfidation epithermal gold-silver deposits, in all of the drill holes. Final assay results are pending.

The El Quevar project spans 56,719 hectares located in the Salta Province of northwestern Argentina, in the altiplano region roughly 300 kilometers by road northwest of the provincial capital city, Salta. It is also accessible by a 300-kilometer dirt and gravel road from the city of Calama in northern Chile. Altitudes at El Quevar range from 3,800 to 6,130 meters above sea level and the climate in the area is high mountain desert.

The small village of Pocitos, located about 20 kilometers west of El Quevar, is the nearest settlement.

A high-tension power line is located roughly 40 kilometers from El Quevar, and a high-pressure gas line subsidized by the Salta government and devoted to the mining industry is located within four kilometers of the El Quevar camp. Power for the camp and exploration decline is provided by on-site diesel generators.

We maintain a camp that accommodates up to 100 workers, located approximately 10 kilometers west of the Yaxchté Deposit and within the El Quevar claim block.

There are no private properties within the project area, and surface rights at El Quevar are controlled by the Salta Province. The project is comprised of 31 exploitation concessions which have been granted by the Salta Mining Court and which we hold directly.

Mining activity in and around the El Quevar project dates back at least 80 years. Between 1930 and 1950, lead and silver were mined from small workings in the area, but we have no mining records from that period. The first organized exploration activities on the property occurred during the 1970s.

El Quevar was placed on care and maintenance in early 2013, as metals prices fell and Golden sought to identify a partner with whom to further the project.

In the third quarter of 2017, we applied for and subsequently received a permit to dewater the underground mine workings at El Quevar, in order to evaluate the possibility of underground exploration drilling in conjunction with a project to re-model the existing silver resource at the Yaxtché deposit. We engaged AMEC Foster Wheeler (now Wood Group PLC) to re-model the existing (June 2012, RPMGlobal) Yaxtché silver resource using an improved geologic model and a higher cutoff grade for silver. Wood Group has defined a smaller but higher-grade resource within the core of the previously-defined Yaxtché deposit, in a potentially underground mining configuration that would be processed by flotation. This February 2018 estimate highlights an Indicated sulfide resource of 2.6 million tonnes at an average grade of 487 g/t, using a 250 g/t cut-off silver grade.

In September 2018, we completed a PEA for El Quevar.  Highlights of the PEA are as follows:

Note:  PEA parameters assume a silver price of $16.66/oz and a discount rate of 5%.  All figures throughout this release are expressed in US Dollars unless otherwise noted.

In September 2019, the Company announced results of a 3,000-meter, 19-hole drilling program at the El Quevar district-scale silver project. The program sought to identify areas of potential mineralized material that could be accretive to the currently-defined high-grade silver resource in the Yaxtché deposit. A new shallow high-grade zone was partially outlined in the Vince area about two kilometers southwest of the Yaxtché deposit.

The geology of the El Quevar project is characterized by silver-rich veins and disseminations in Tertiary volcanic rocks that are part of an eroded stratovolcano. Silver mineralization at the El Quevar South area is hosted within a broad, generally east-west-trending structural zone and occurs as a series of north-dipping parallel sheeted replacement zones, breccias and mineralized faults situated within an envelope of pervasively silicified brecciated volcanic rocks. There are at least three sub-parallel structures that extend for a total length of approximately 6.5 kilometers. Several volcanic domes (small intrusive bodies) have been identified and mineralization is also found in breccias associated with these domes, especially where they are intersected by the structures. The silver mineralization at the Yaxtché zone is of high-sulfidation epithermal origin. The cross-cutting nature of the mineralization, the assemblage of sulfide and alteration minerals, and the presence of open spaces with euhedral minerals all point to an origin at shallow depths (a few hundred meters below surface) from high-sulfidation epithermal hydrothermal solutions. 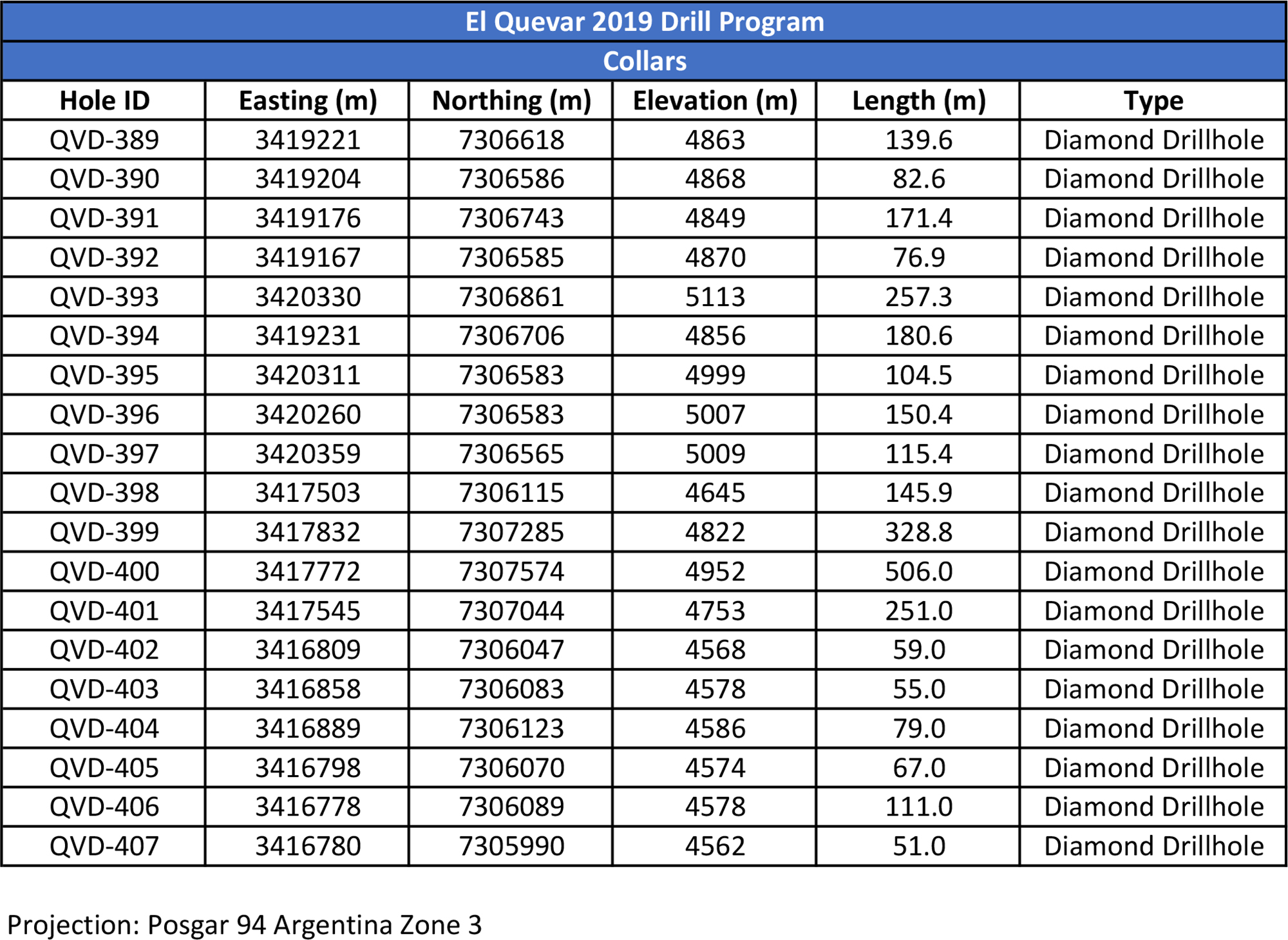